o Start brewing at the Park Brewery in Wolverhampton

o Purchase of City Brewery Co. of Lichfield and Robert Allen of Worcester

o Floated on the Stock Exchange

o Purchase of Marton, Thompson & Evershed of Burton on Trent

A brewery or brewhouse, is a place where beer is brewed. For beer lovers, the glory of Great Britain is cask-conditioned ale. It imparts a roundness and depth of flavour to the finished brew which otherwise is difficult to achieve. The variety of Breweries found in Britain is as diverse as the beers themselves. Ranging from the smallest being a single brewhouse behind a pub, to the large national brewers which often take over a whole town. In recent times there has been the takeover of many smaller breweries by a few ‘big boys’ - none more so than perhaps Marston’s PLC. Not only a Pubco but also a Brewco. In days gone by, if you walked into a pub and saw 13 handpulls with pump clips showing Marston’s Pedigree, Banks’s Mild, Jennings Cumberland, Ringwood Old Thumper, Wychwood Hobgoblin, Brakspear Oxford Gold, Mansfield Bitter, Thwaites Wainwright, McEwan’s Champion, Eagle IPA, Courage Directors, Charles Wells Bombadier and Draught Bass you would be in a real ale lovers paradise - now all brewed by Martson’s PLC although Draught Bass is brewed under contract for a now owned Belgian multinational InBev! From Real Ale to Lager sponsored cable cars For those that remember, there used to be a lovely beer brewed in Burton upon Trent called Ind Coope Burton Ale. Sadly the beer disappeared in 1998 when the Burton Brewery was sold to Bass however the history of that beer also isn’t simple. The Ind Coope brewery was founded in Romford, Essex in or around 1800 before opening a brewery in Burton upon Trent. The company merged with Allsop & Sons Ltd in 1934 to become Ind Coope & Allsopp Ltd. In 1961 it merged to become Allied Breweries (Ind Coope, Ansells, Tetley Walker) and then Allied Lyons (J. Lyons & Co.) in 1978 before being merged in 1992 to become Carlsberg Tetley and then part of Carlsberg (a Danish company) in 1997. In 2008 Carlsberg together with Heineken bought Scottish & Newcastle, the UK’s largest brewer.
Marston’s PLC 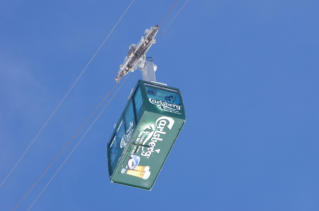 Highgate Brewery, built in 1898 which is located in the Black Country town of Walsall, is typical of the time when attention to detail was the norm and when brewers could afford to spend a fair sum of money on the architectural style of their buildings. Unfortunately, today the government takes so much tax from a pint of beer that many breweries have been closed down or been taken over by the multi nationals, Highgate's six-storey brick facility exemplifies a standard Victorian tower brewery. In fact, the well-preserved building now is listed on Britain's national historic register. The brewery name came from an actual "high gate" that once allowed access to old Walsall. And while Highgate has produced bitter and pale ale in the past (in addition to the Old Ale), its principal product always has been a dark mild. Highgate was purchased by Birmingham's Mitchells & Butlers Brewery in 1939. At first, the new owners kept Highgate open in order to claim its allowance of raw materials (malt, hops, etc.) during wartime rationing. But Highgate continued to operate after the war because its beer had become strongly associated with the local area. Mitchells & Butlers was subsequently taken over by the Bass brewing group and many of the former M&B breweries ceased or moved production to their huge site at Cape Hill in Smethwick, north west of Birmingham. Mitchells & Butlers Springfield Brewery in Wolverhampton opened in 1873, ceased production of the uninspiring 'Springfield Bitter' in 1990. The site is now used by Wolverhampton University. Burton upon Trent, a Town in Staffordshire, central England, on the River Trent, northeast of Birmingham, is regarded as the capital of the brewing industry in Britain. It is a former cotton-spinning town. Brewing is the principal industry, with five major breweries in operation; Marmite savoury spread is produced from the yeast by-products. Engineering, food-processing, and the manufacture of tyres and rubber goods are also important. The Benedictine monks of Burton Abbey (founded in 1002) began the town's tradition of brewing in the 11th century. Gypsum deposits in the area make the local well water high in calcium sulphate, which is particularly good for the production of beer. The earliest-known reference to Burton ale was in 1295, it was noted in London in 1630, and commercial production began in the mid-18th century. The history of brewing in Burton is illustrated at the Bass Museum. Marmite was first produced in 1902. The town expanded rapidly following the opening of the Midland Railway in 1839. A number of Burton's public buildings, including the town hall (1894), were presented to the town by Michael Bass (1799-1884), who became Lord Burton. Burton Union: A method of fermenting beer in which yeast is transferred from large casks into subsequent brews. The system was once used in the brewing of Draught Bass but now only Marston’s use the system to brew their Pedigree ale. Guinness Irish brewing family who produced the dark, creamy stout of the same name. In 1752 Arthur Guinness (1725-1803) inherited £100 and used it to set up a brewery in Leixlip, County Kildare, which was moved to Dublin 1759. The business grew under his son Arthur (1767- 1855) and under Arthur's son Benjamin (1798-1868), who developed an export market in the USA and Europe. In the 1980s, the family interest in the business declined to no more than 5 % as the company expanded by taking over large and established firms such as Bells in 1985 and Distillers in 1986. In 1997 the company merged with Grand Metropolitan in 1997 to form Diageo, a British multinational company that own brands such as Harp Lager, numerous Scotch whiskies including Bells & Johnnie Walker, Smirnoff Vodka, Gordon’s Gin, Captain Morgan Rum, Pimms and Baileys. Shepherd Neame, regarded as Britain's oldest brewery, began in 1698 when Captain Richard Marsh of the Cinque Ports Militia, a mayor of Faversham, founded a brewery over an artesian well in the town. During that period Faversham was a bustling port and already enjoyed a brewing tradition dating back to the 12th century when King Stephen founded a Benedictine abbey just yards from the present brewery site. It didn't take the Cluniac monks long to discover that Faversham's pure spring water could be combined with locally-grown malting barley to produce a particularly fine ale. The brewery founded by Richard Marsh was quite substantial and far removed from the innkeepers of the town who brewed on their premises. In 1741 the brewery was acquired by Samuel Shepherd, a member of a prominent land owning family and already active for some years in Faversham as a maltster. With a growing population to serve, Faversham was becoming an increasingly important brewing town when Samuel Shepherd was joined in the business by his sons Julius and John. It was at this stage that the family began buying pubs, several of which are still owned by the company today. As various partners joined the firm, so the name changed to Shepherd & Hilton, Shepherd & Mares and, finally, when John Mares died and 28-year-old Percy Beale Neame joined the partnership in 1864, Shepherd Neame. 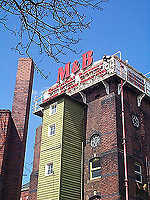 We could never hope to keep on top of the comings and goings of the breweries. Like the Pubco’s there are many breweries that have bought up the smaller independent brewers to form huge suppliers of beers from all over the country - some of which are Brewco’s as well as Pubco’s. Thankfully since the sorry days of the 1970’s, the increase of small independent brewers is steadily growing as are Micropubs